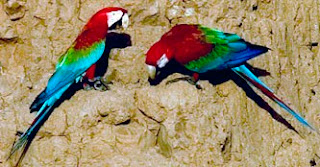 Oct. 3, 2005 —
It melts in your mouth like chocolate, says Ruth Anne T. Joiner, describing her favorite treat.
"The good stuff is real smooth," she adds. "It's just like a piece of candy."
Joiner is describing the delectable taste of dirt -- specifically, clay from the region around her home in Montezuma, Ga.
While most people would recoil at the thought of eating mud or clay, some medical experts say it may be beneficial, especially for pregnant women.
"Every time I get pregnant, I get a craving -- I have to eat it," says Joiner, 40, who has given birth to four healthy babies.
"If I could get just one little bitty piece, that would stop the craving," she says. "It has a fresh, natural-feeling taste, like the rain or something."

Healthy Habit or Mental Illness?
The habit of eating clay, mud or dirt is known as geophagy. Some experts lump it into the same category as pica, which is the abnormal urge to eat coins, paint, soap or other non-food items.
Cultures worldwide have practiced geophagy for centuries, from the ancient Greeks to Native Americans. In most places the habit is limited to women, especially women who are pregnant or of childbearing age.
Audio report: Eating clay in Africa: World Vision Report - Week of March 14, 2009 - Eating Clay
The practice is common in sub-Saharan Africa, and many anthropologists believe geophagy was brought to the United States by African slaves. It is now most commonly found among African-American women in the rural South. Though the practice is rarely if ever recommended by medical professionals, some nutritionists now admit the habit of eating clay may have some real health benefits. "It is possible that the binding effect of clay would cause it to absorb toxins," said Dr. David L. Katz, nutrition expert at the Yale School of Medicine and a medical contributor for ABC News.
Clay's ability to absorb plant toxins is well documented. Jared Diamond, professor of geography and physiology at the David Geffen School of Medicine at UCLA and author of "Guns, Germs, and Steel: The Fates of Human Societies" has written on clays that are especially good at binding with plant toxins.
Diamond notes that many traditional cultures cook food like potatoes, acorns and bread in clay as a way of protecting against the toxic alkaloids and tannic acids that would otherwise make these foods inedible.
Glycoalkaloids, for example, are commonly found in potatoes and can cause diarrhea, vomiting and neurological problems in humans. But when South American Indians eat these potatoes in combination with alkaloid-binding clays, the potatoes are safe to consume, according to Diamond.


Dirt: The World's First Mineral Supplement
Medical professionals studying geophagy are also considering whether the minerals in some clays are especially beneficial for pregnant women.
"Mineral supplements are a pretty new phenomenon," said Katz. "Mineral demand goes up substantially during pregnancy."
"Soil is nature's multi-mineral supply," he added, "and nature favors behaviors that lead to survival. It may simply be that women who had this craving were more likely to survive and pass on this tendency to their offspring."
Mineral content in clays vary from region to region, but many contain high levels of calcium, iron, copper and magnesium. These are essential minerals for the human diet but even more critical during pregnancy.


Erica Gibson-Staneland, an anthropologist at Rollins College in Winter Park, Fla., has found that geophagy is more often found in cultures that do not practice dairying. Dairy products like milk and cheese would provide important dietary calcium -- when these are absent, pregnant women may seek other sources.
"It's about women lacking nutrients or women in impoverished conditions who don't have access to health care, adapting," said Gibson-Staneland.
"In Africa, they eat the dirt from termite mounds," she added, noting that the dirt and clays from termite mounds are rich in minerals.
My Dirt Is Better Than Your Dirt
Because not all clays are created equal, women who eat clay are very particular about which clays they consume.
"Everywhere that geophagy has been recorded, it's passed down that there's a certain location where the dirt is tastier or they know it to be cleaner," Gibson-Staneland said.
Joiner, who has eaten clay for over 20 years, refuses to eat certain clays because they contain sand or have a gritty taste. "Make sure you get the real stuff," she advised. "Some people just go out locally and get it. The store's chalk is not as good. I could actually taste the difference."
And most women who practice geophagy get their clays from sources other than the first few inches of topsoil, which have the most biological activity -- and the most bacteria, parasites and other pathogens.
"It's mostly subsurface stuff and I think that's probably less likely to be a source of infection," said Gerald N. Callahan, immunologist at Colorado State University in Fort Collins.
Callahan believes eating clay may be a way to build up the immune system during pregnancy. Citing what has been referred to as a "hygiene hypothesis," he noted that children raised in rural areas, especially on farms, have fewer allergies and autoimmune diseases than children raised in cities -- some researchers believe exposure to soil and other environmental impurities is the reason.
"It's possible that the [pregnant] woman would be strengthening her immune system at the same time she's going to turn antibodies to the child," said Callahan.

Another advantage to eating clay during pregnancy may be the calming effect it can have on the mother's gastrointestinal system, which can succumb to bouts of nausea and morning sickness.
Clays, especially white clays, are made of kaolin. Indeed, Rolaids, Maalox and other medicines recommended for nausea and stomach upset are filled with the same antacid compounds found in white kaolin clays.
Charles N. Maddox of Griffin, Ga., has for many years sold locally mined clay under the catchy brand name Down Home Georgia White Dirt. "It's just Kaopectate," Maddox said. "The old drunks, they used to get drunk and put it [clay] in water and drink it, then go to work. The old-timers and people in Louisiana and Mississippi -- they just love to eat that Mississippi mud."
Maddox's product, however, is not sold for human consumption, though he knows that some locals might be inclined to eat clay.
"We don't suggest that people eat it. We just bag it as a novelty," Maddox said.


The Downside to Dirt

Even avid fans of clay eating admit it can be a problem. There is a negative social stereotype associated with anyone who would consume dirt right out of the ground. Many of those familiar with the practice disdain "dirt-eaters" as poor, ignorant or malnourished.
"There's definitely a stigma," said Gibson-Staneland. "Cleanliness is next to godliness, so you don't want to be known as someone who puts dirt in their mouth."
And there may be medical problems associated with over-consumption of clay. Constipation is a common complaint among those who eat clay regularly, due to the same binding effect that makes it an effective anti-diarrhea remedy.
"It will make you constipated," Joiner admits.
For women who are concerned about vitamin and mineral deficiencies during pregnancy, Katz offers this advice: "Take a prenatal vitamin."
But those who have been eating clay all their lives are unlikely to stop, and now some experts are unlikely to encourage them to give up the habit.
Salt, notes Gibson-Staneland, is also a mineral, one that is found on almost every restaurant table in America.
"If most humans readily use water and salt," asks Gibson-Staneland, "why not utilize clay as a food source if it is beneficial?"

KNOWLEDGE IS POWER: TABLE OF CONTENTS

Byron does not charge for his work. He refuses no one. Help Byron share Earth Medicine with more people. Thank You.

"Nothing will benefit human health and increase the chances for survival of life on Earth as much as the evolution to a vegetarian diet." Albert Einstein (click picture)